Northern Ireland’s leading pro-life group Precious Life say they were delighted with the thousands of people who travelled to Stormont in Belfast on Saturday 7th July for the All Ireland Rally for Life.  The pro-life group said the Rally gave the people of Ireland an opportunity to send out a clear message to politicians that Ireland’s unborn children must continue to be protected in law, and “Our Laws Matter because Every Life Matters.”

The Rally, now in its 12th year, alternates annually between Belfast and Dublin. The Keynote speakers were Bernadette Smyth from Precious Life in Belfast and Niamh Ui Bhriain of the Life Institute in Dublin.

The opening speech was given by Assembly Member Jim Wells, who sponsored the event at Stormont. Mr Wells spoke passionately about how he will continue to protect unborn children, stating that it should be most important issue for any politician, as all other issues come second to the right to life. 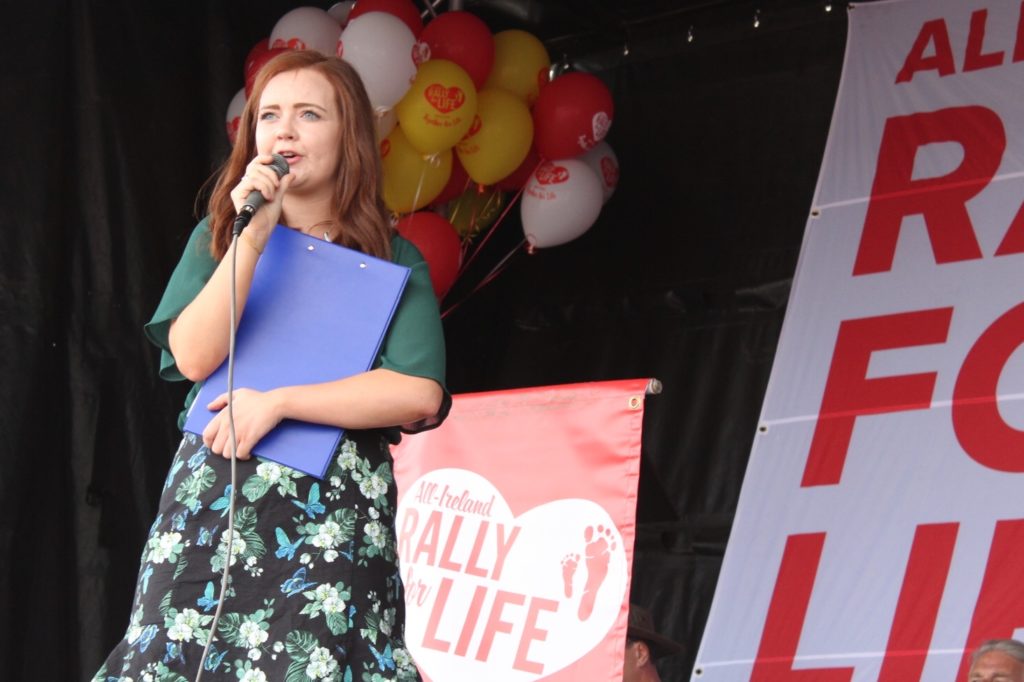 Special Guest Speaker at the Rally was Dr John Littell from USA – author of the book – “The Hidden Truth”. He exposed the deception of abortion as women’s ‘healthcare’.

Other speakers include women hurt by abortion and women who have continued with their pregnancies after receiving a diagnosis that their baby would have a life-limiting disability.

Director of Precious Life, Bernadette Smyth said, “People from across Ireland – North and South – came to Stormont on Saturday and proudly stood ‘Together for Life’ in support of protecting unborn babies and their mothers from abortion.”

She explained, “After the tragic result of the Abortion Referendum in the Republic of Ireland, we are more determined than ever to keep fighting to uphold our laws that protect unborn babies. The threat to unborn children in the North has now intensified more than ever. Pro-abortion politicians here, in collusion with abortion organisations, are trying to change our pro-life laws in Northern Ireland with the ominous threat – “The North is Next.”

“And because of the stalemate at Stormont in restoring power sharing in Northern Ireland, pro-abortion MPs in Westminster are trying to ride roughshod over the democratic process here and force abortion on Northern Ireland. But the legislation governing these issues is a devolved matter for the Northern Ireland Assembly only.”

Mrs Smyth added, “Despite this strong pressure coming against us, we will continue to defend the right to life of our unborn children. We will not stand idly by and let pro-abortion politicians try to legalise the killing of our unborn children by attacking our pro-life laws. Our Laws Matter because Every Life Matter – Precious Life’s  ‘Lobby for Life Campaign’ will be stepped up over the coming months as is now more crucial than ever to ensure our Assembly upholds the pro-life laws in Northern Ireland when power-sharing is restored.” 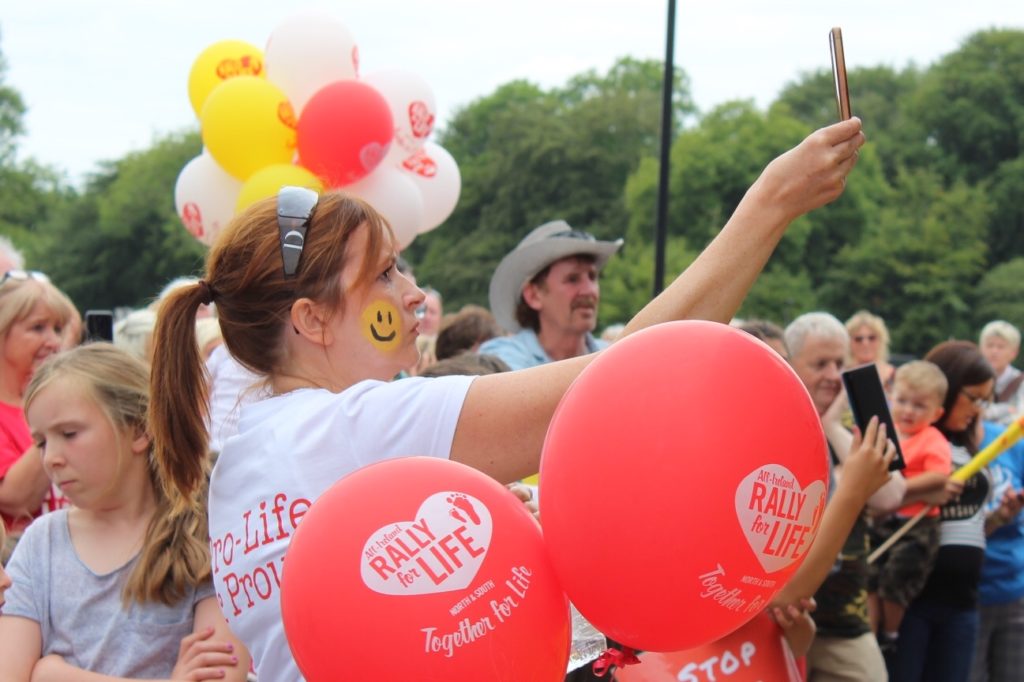 Also speaking at the Rally was Yvonne Morgan, whose twins Erin and Eden were saved from abortion. Yvonne said, “Our laws against abortion in Northern Ireland saved not only my twin baby daughters lives, but also my own, because the guilt and shame for killing my babies would have consumed me totally and led me down the path of suicide. Our laws matters because my babies matter”

Niamh Ui Bhriain of the Life Institute said, “This is our land and we will not rest until it is a pro-life light to the world once again. We will rebuild the culture of life in Ireland, we will stand strong, we will walk tall, we will fight on – in the North and the South – a people united together for life – because a child’s life is always worth fighting for.”

Both Bernadette Smyth and Niamh Ui Bhriain criticised Sinn Fein for betraying Ireland by supporting the killing of Irish babies and by supporting politicians and organisations in Britain who are campaigning for abortion in Ireland.

Bernadette Smyth concluded, “To the pro-abortion politicians in Ireland who gloat that ‘The North is Next’ – we say ‘The North Protects’. To the pro-abortion politicians in Westminster we say – stop trying to EXPORT your ‘culture of death’ to Northern Ireland. This Rally for Life has sent out a powerful message to Stormont, Westminster, the Dáil, and indeed to the entire world – that the pro-life people of Ireland, both north and south, will continue to be a voice for unborn children when and wherever their lives are in danger – we remain strong, steadfast and undefeated.” 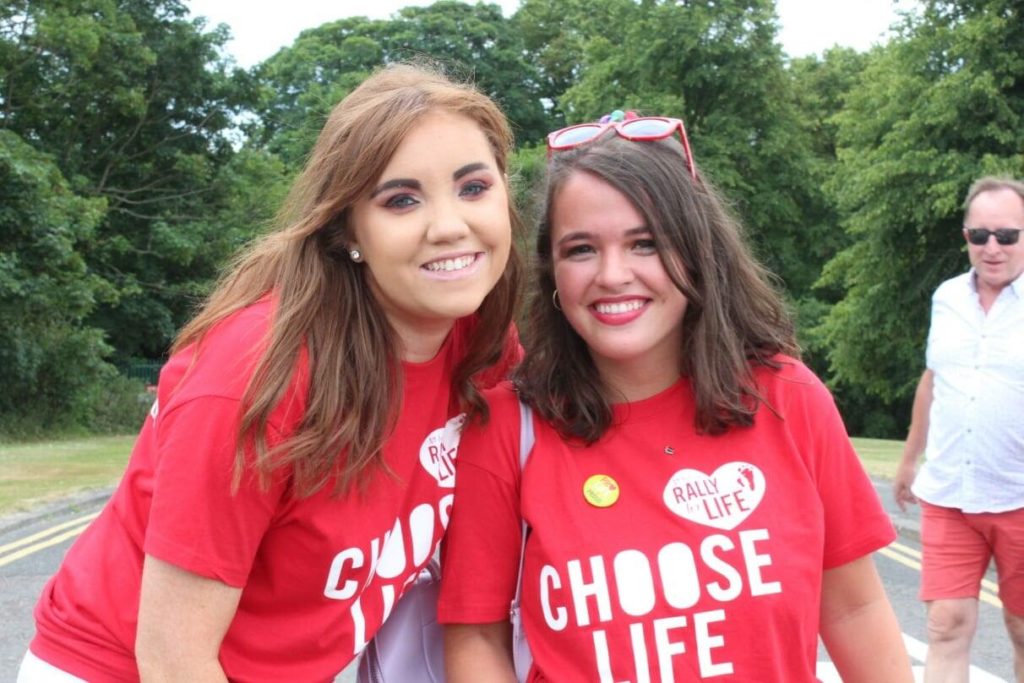 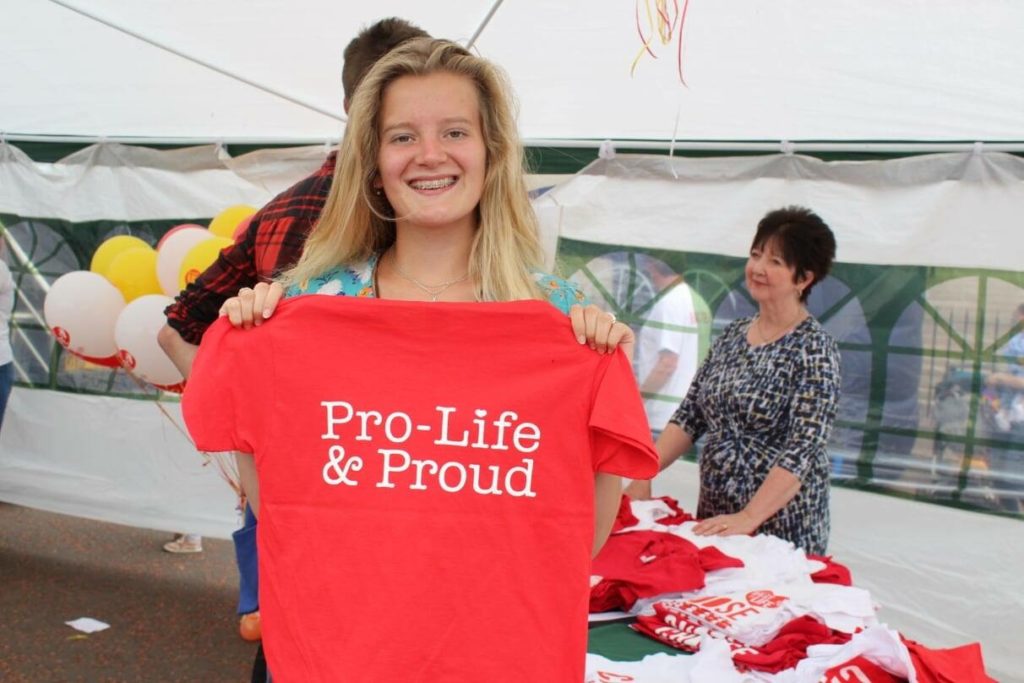 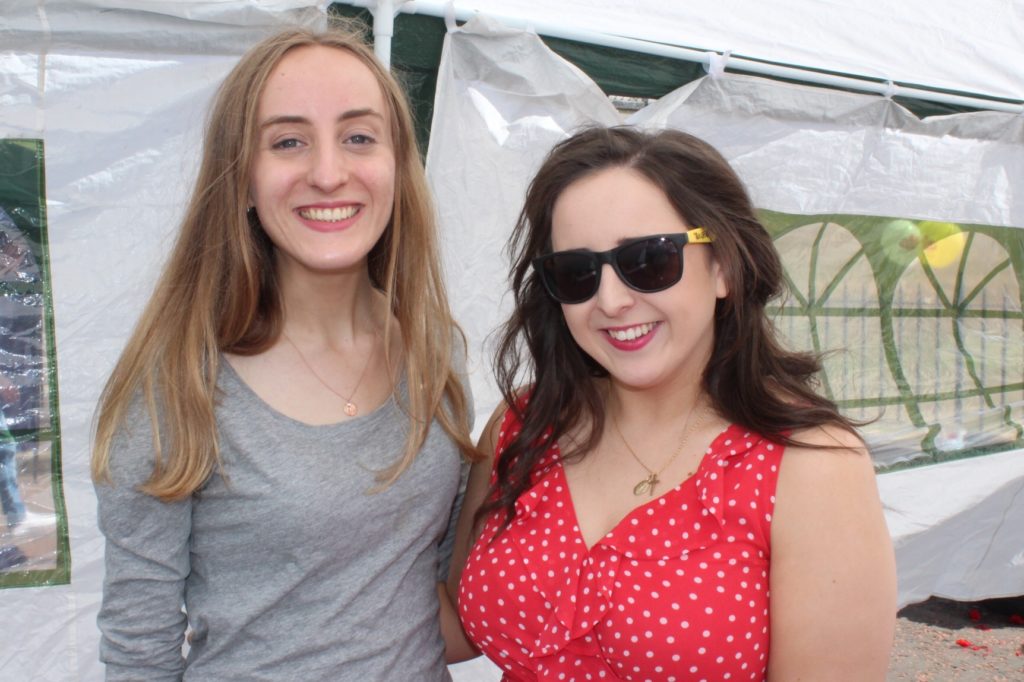 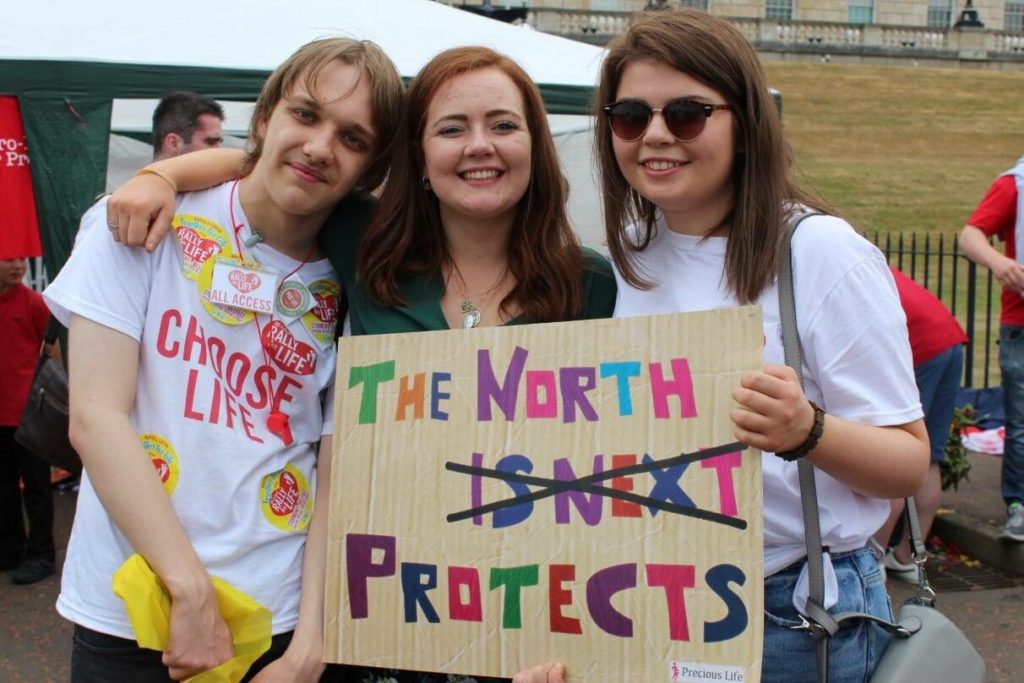 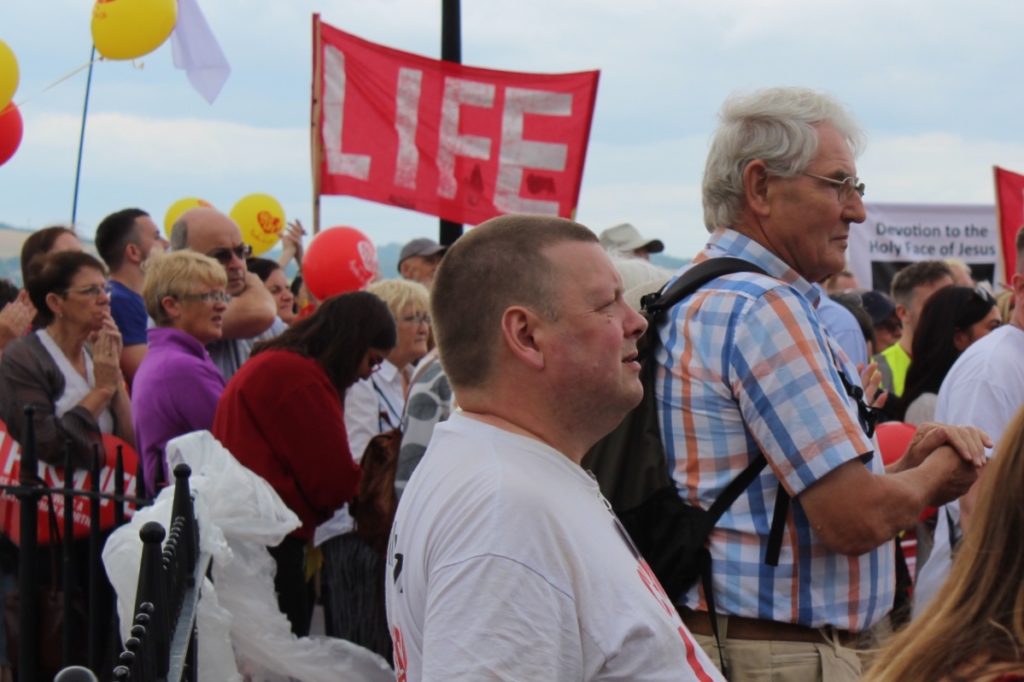 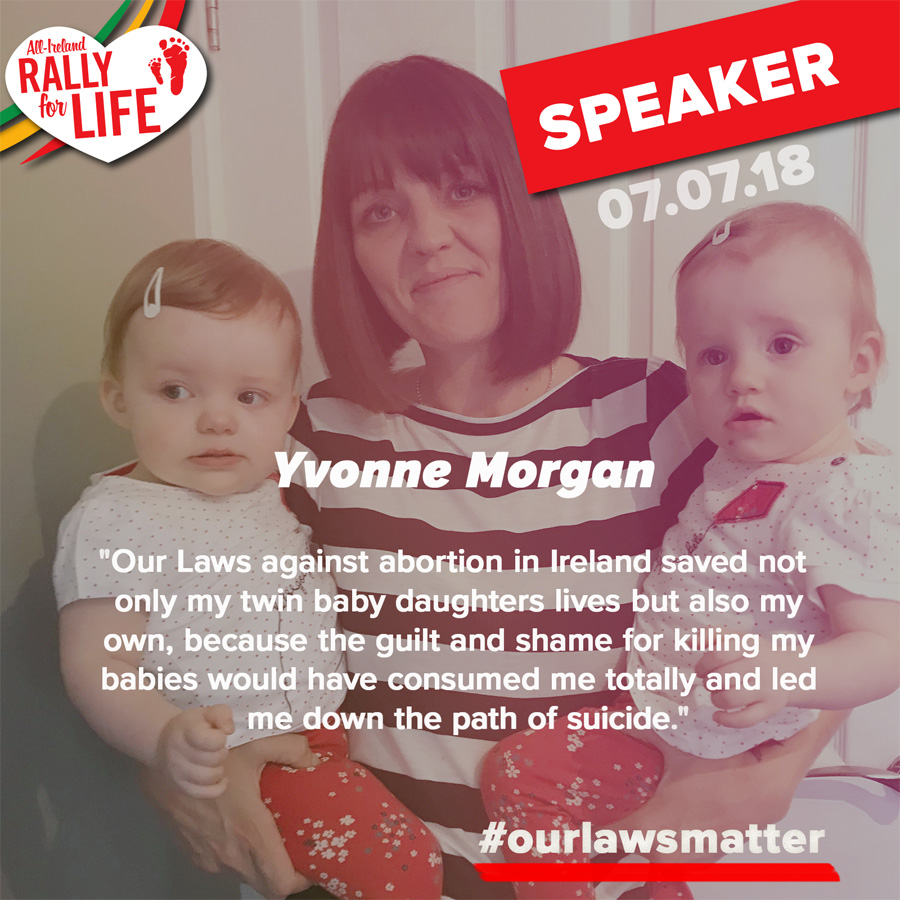 “Our Laws against abortion in Ireland saved not only my twin baby daughters lives but also my own, because the guilt and shame for killing my babies would have consumed me totally and led me down the path of suicide”. Our laws mattered because my babies matter”

Yvonne Morgan, who’s twins Erin and Eden were saved from abortion through Stanton

Speaking at the All Ireland Rally for Life in Belfast on the 7th July, be there to see and hear Yvonne! 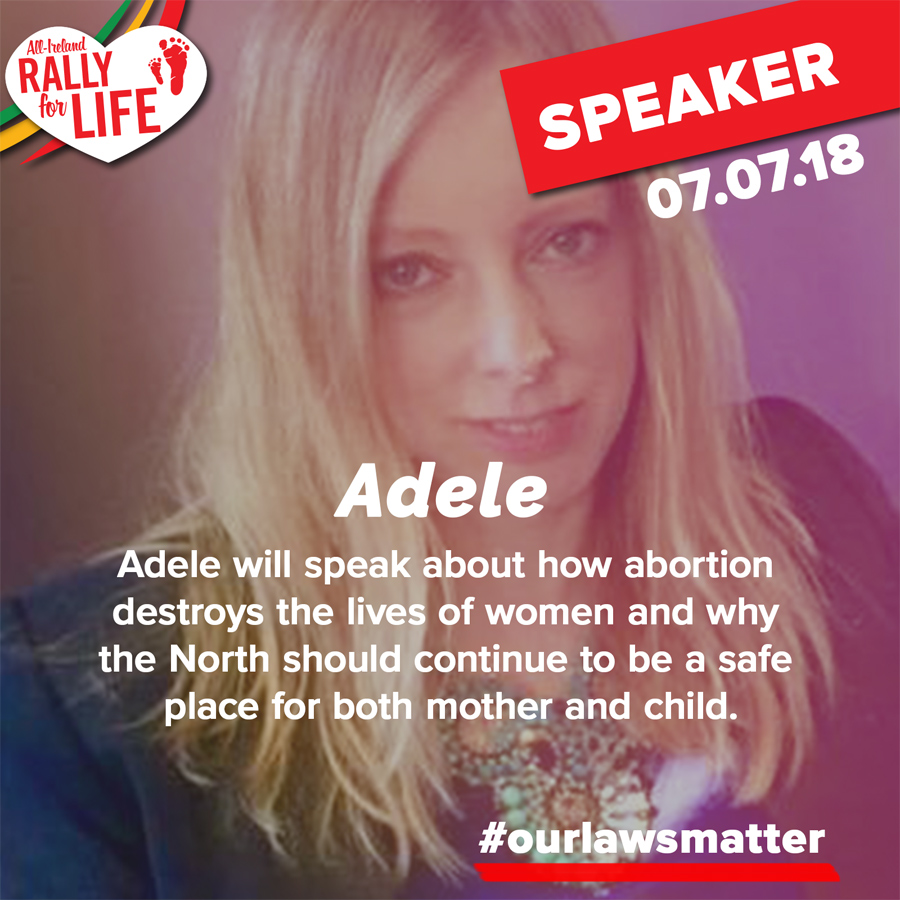 Adel speaks about how abortion destroys the lives of women and how her own abortion experiences have changed her mind on the right to life of every human being. 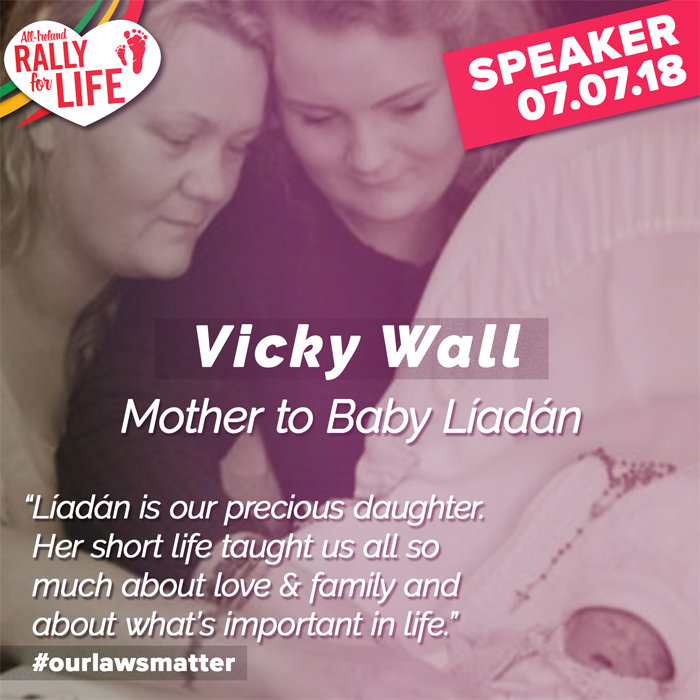 Vicky shares her beautiful testimony of her daughter Líadán who was diagnosed with Trisomy while in the womb. 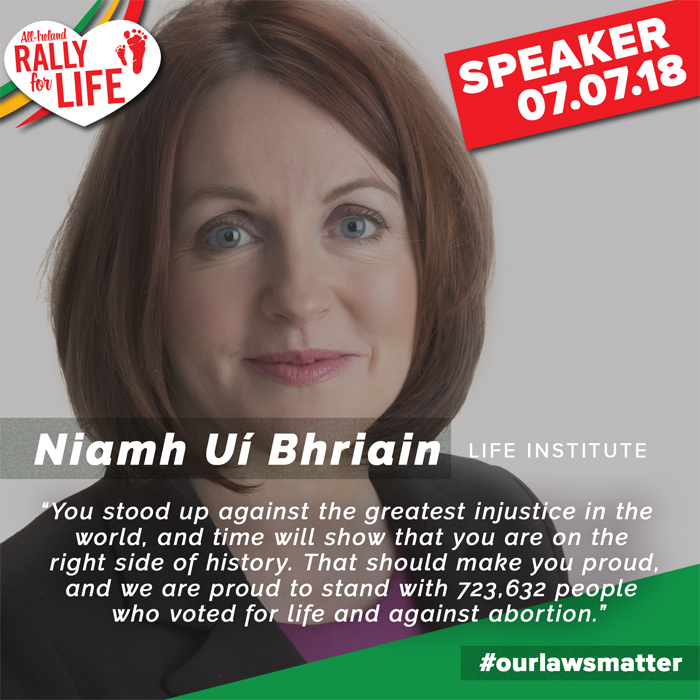 Niamh Uí Bhriain, Life Institute, a pro-life activist and leader for over 25 years

Connect with the Rally for Life