The March for their Lives in Belfast on Saturday, 7th September, drew such a huge crowd that the police had to ask organisers to re-route the march to accommodate the estimated 20,000 people who attended.

The rally, billed as March for Their Lives, was organised by Precious Life and Youth for Life NI to protest the decision by the British parliament in Westminster to impose an abortion law on the North which would allow abortion up to 28 weeks.

Tens of thousands of pro-life supporters participated in the event, packing Custom House Square to hear Baroness Nuala O’Loan and other speakers, before setting off on the march which swelled in numbers as it made its was through the city.

“It’s pro-life gridlock in the city centre, there are just so many people here,” said Moira Brennan, a rally steward. “The PSNI have asked us to take a longer route for the march now because the crowd is so big. It’s just brilliant to see all the families and people of all ages and from all communities out in force against this abortion bill”.

Director Bernadette Smyth said, “More than 20,000 people, from every tradition, attended the March because people are outraged that Westminster has hijacked our democratic process and has sought to impose abortion on Northern Ireland right up to 7 months and in certain circumstances, right up to birth.”

At the March, Baroness O’Loan, a former police ombudsman and widely respected commentator, urged Northern Ireland’s politicians to return to office in Stormont and prevent the legislation being imposed.

“We can see children suffering, not able to get to school. Hospitals not functioning, we can see so much that is wrong. And to compound all that’s wrong, to bring in abortion, unregulated abortion, up to 28 weeks. Just like that. And then to move to march, to pass a set of regulations, which cannot be debated and amended. That is wrong,” she said.

The legislation imposing abortion will come into effect if the deadlock in the north on the Assembly is not broken, but most political analysts believe that Sinn Féin do not want the Assembly to reconvene because the support abortion provision.

Addressing that issue, the march heard from Niamh Uí Bhriain of the Life Institute who slammed Sinn Féin for “going cap in hand to Westminster to ask for a return to direct rule on abortion.” The party, she said “have crossed the Rubicon, betraying their founding principles, upending  200 years of republican tradition, sacrificing freedom and sovereignty for their slavish devotion to identity politics and for their obsession with abortion”.

The deadline for the Assembly to act is October 21st, and Lucy Kelly of Youth for Life NI urged the attendees at the March for Their Lives to get involved in lobbying and challenging politicians to stop the law being imposed before that date.

The DUP, SDLP and Aontú were represented at the March, with well-known figures such as Ian Paisley MLA, Jim Wells MLA and Aontú leader Peadar Tóibín amongst those in Custom House Square.

Abortion supporters also held a Rally for Choice in Belfast on Saturday, but it was a noticeably smaller event, with RTE News acknowledging  that the March for Their Lives was the ‘much larger’ gathering. 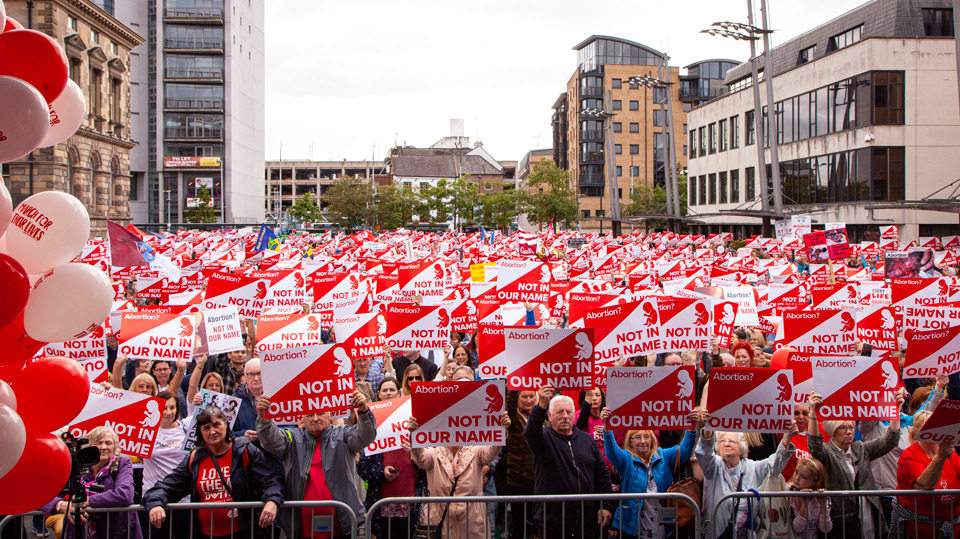 The crowd held posters saying Abortion? Not in our name

Banner leading the March for their Lives 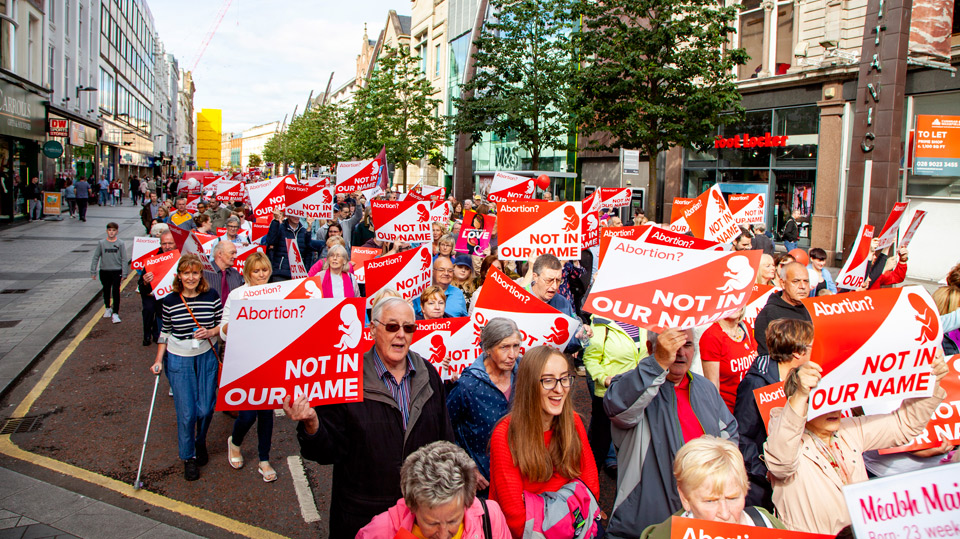 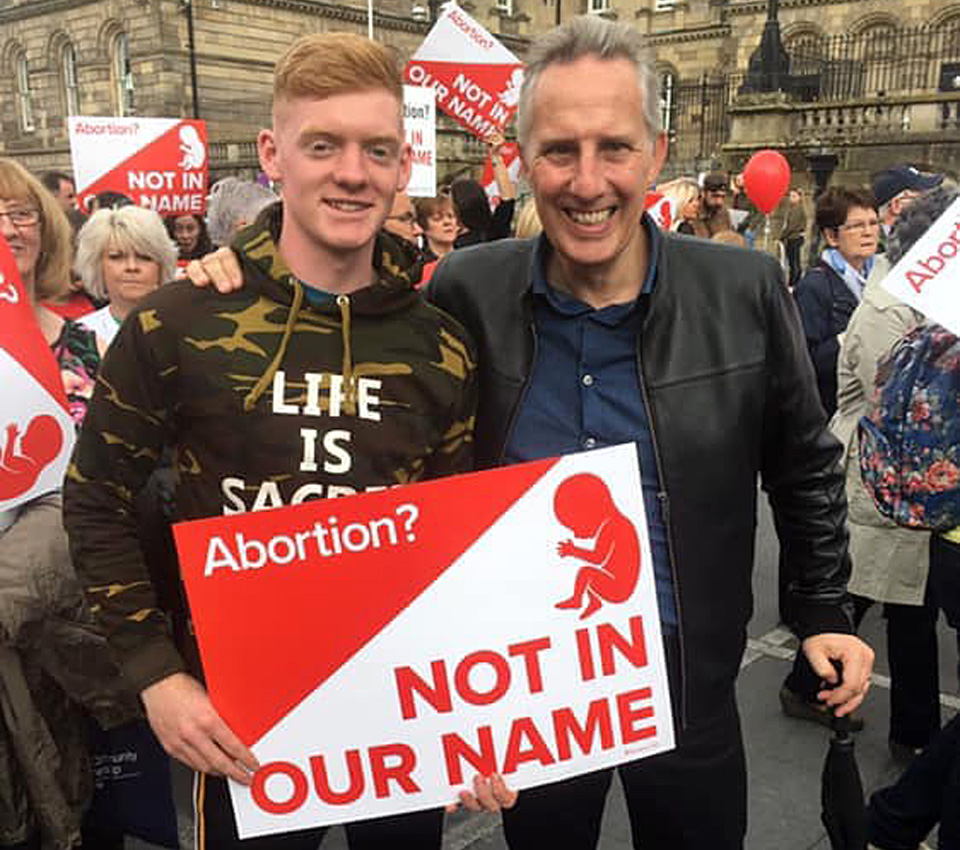 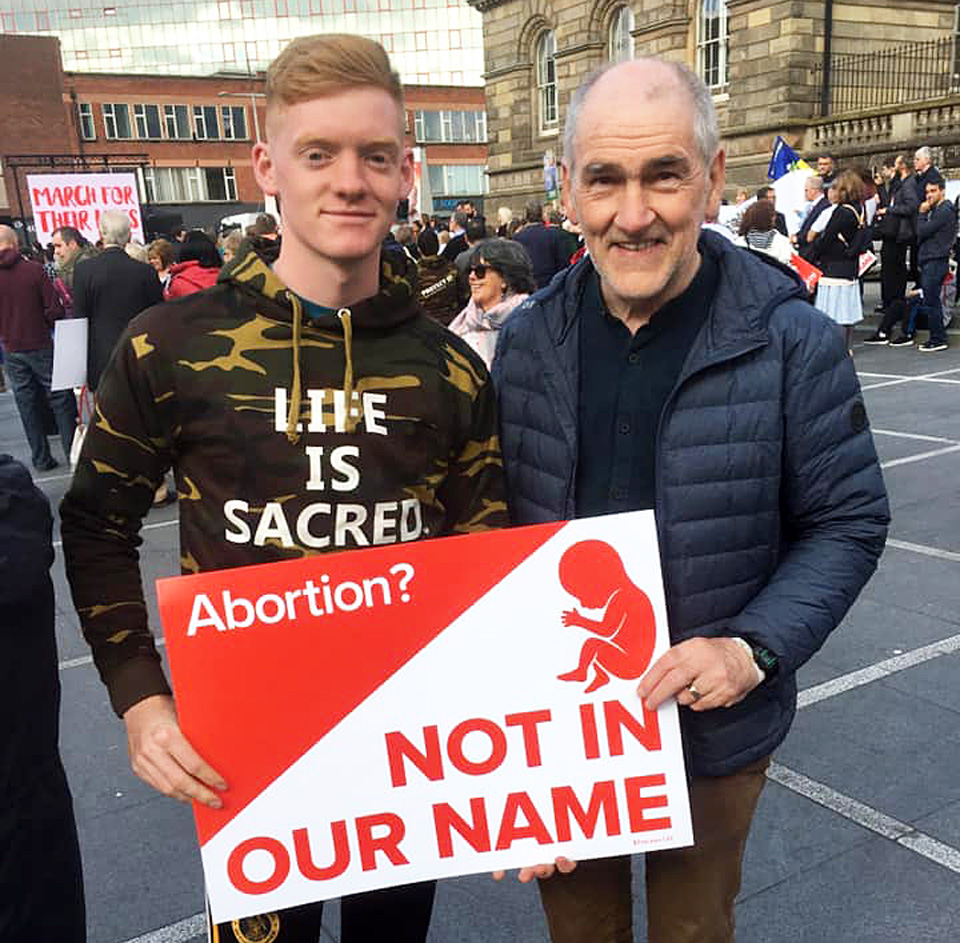 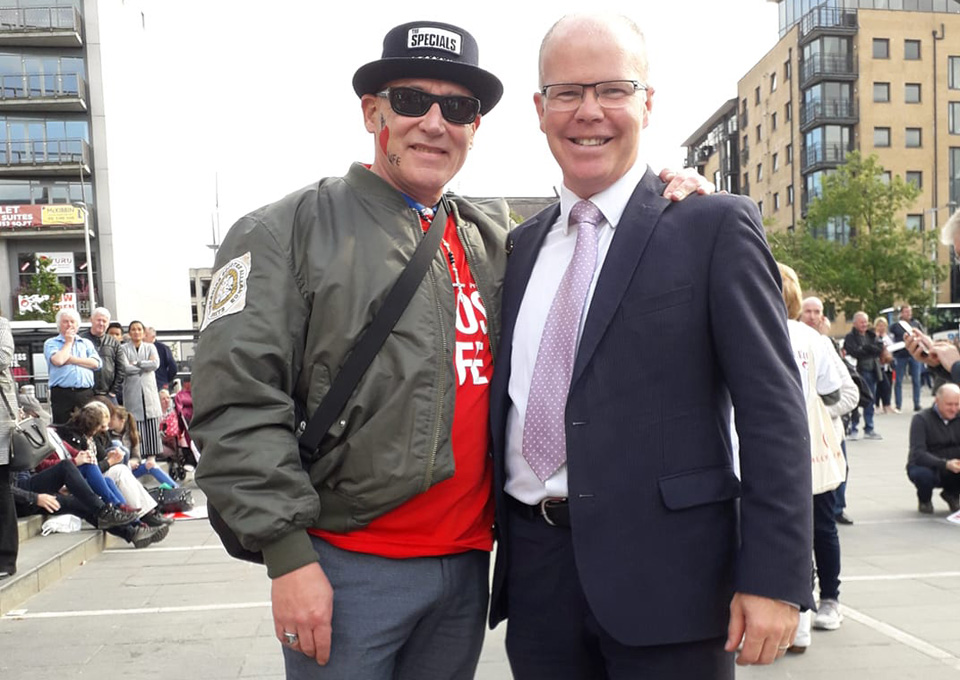 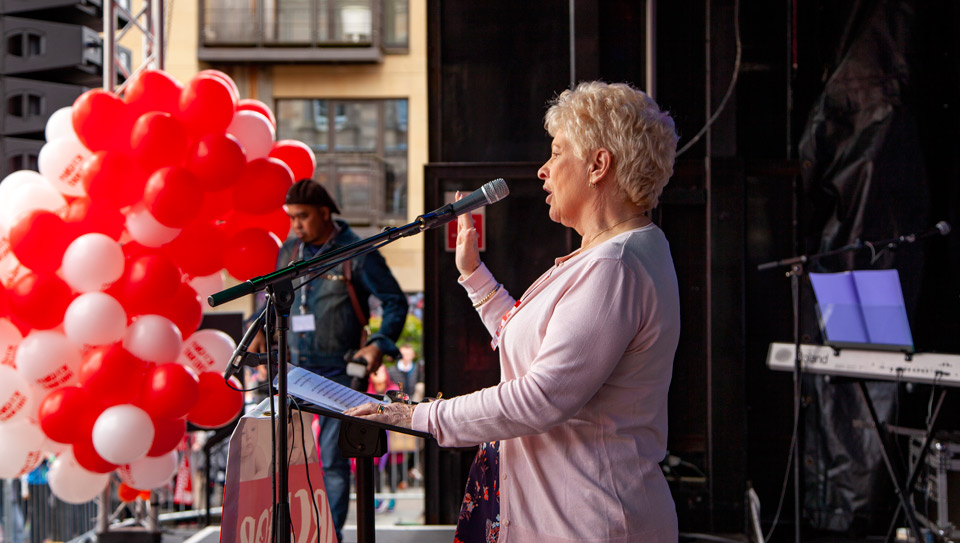 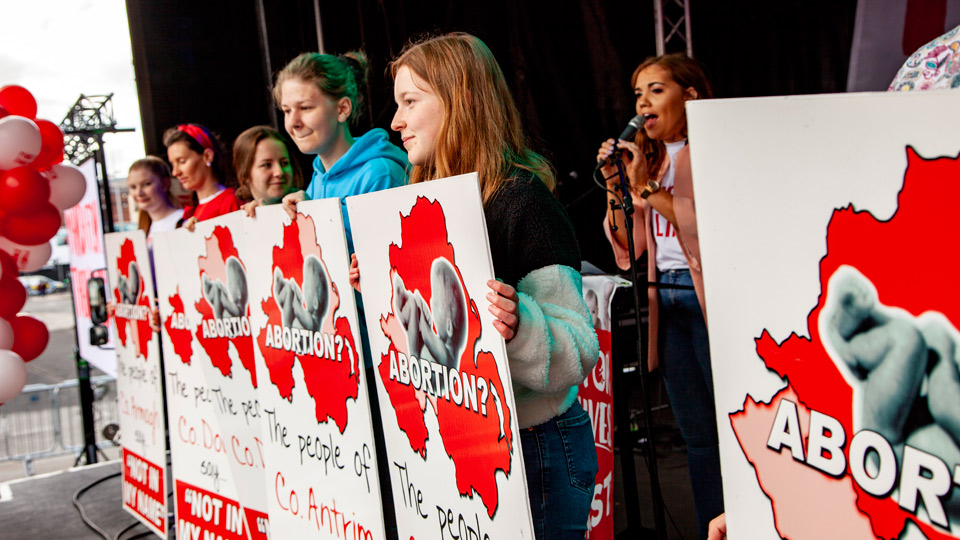 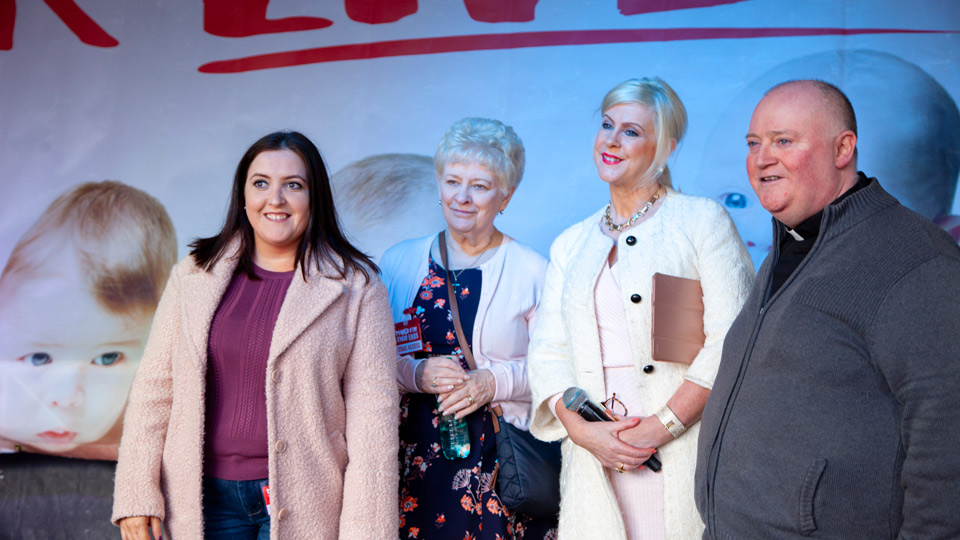 The crowd heard from a number of speakers before and after the march and included Stephanie McKittrick who was advised to terminate her baby 3 times; Baroness Nuala O’Loan; Bernadette Smyth of Precious Life and Fr. Paddy McCafferty of Ballymurphy parish in Belfast

Coverage by the Newsletter 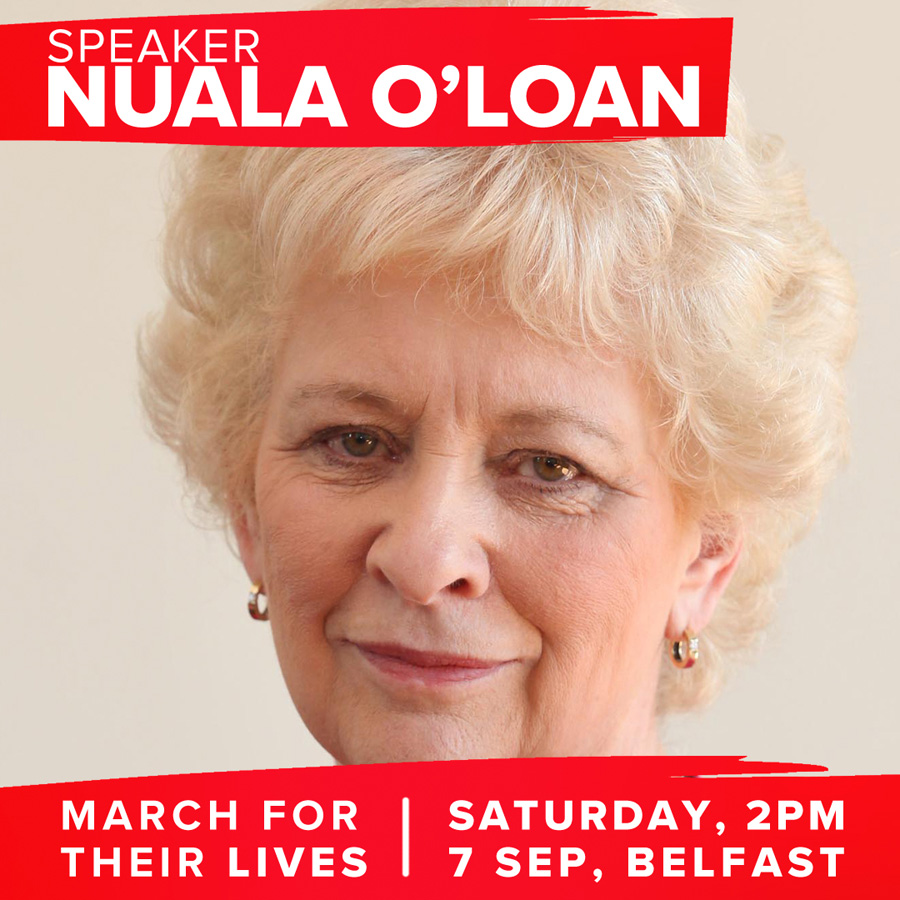 Baroness O’Loan, DBE, is a noted public figurE. She was the first Police Ombudsman from 1999 to 2007. In July 2009, it was announced that she was to be appointed to the House of Lords. In December 2010, National University of Ireland, Maynooth appointed her as Chairman of its Governing Authority. She is a columnist with The Irish Catholic. She has consistently defended the right to life of the unborn child. 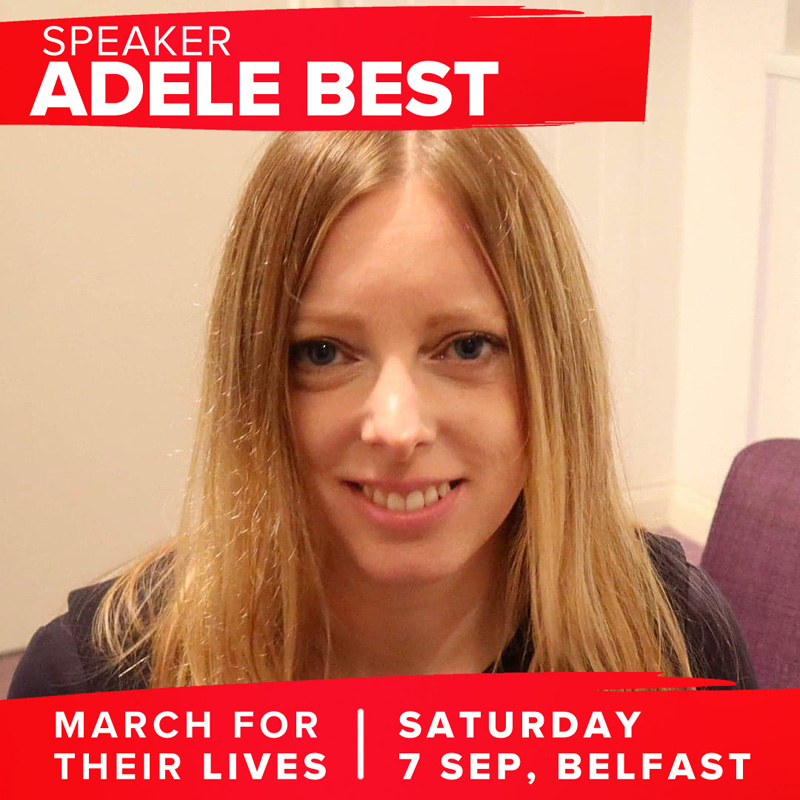 Adele speaks about how abortion destroys the lives of women and how her own abortion experiences have changed her mind on the right to life of every human being. 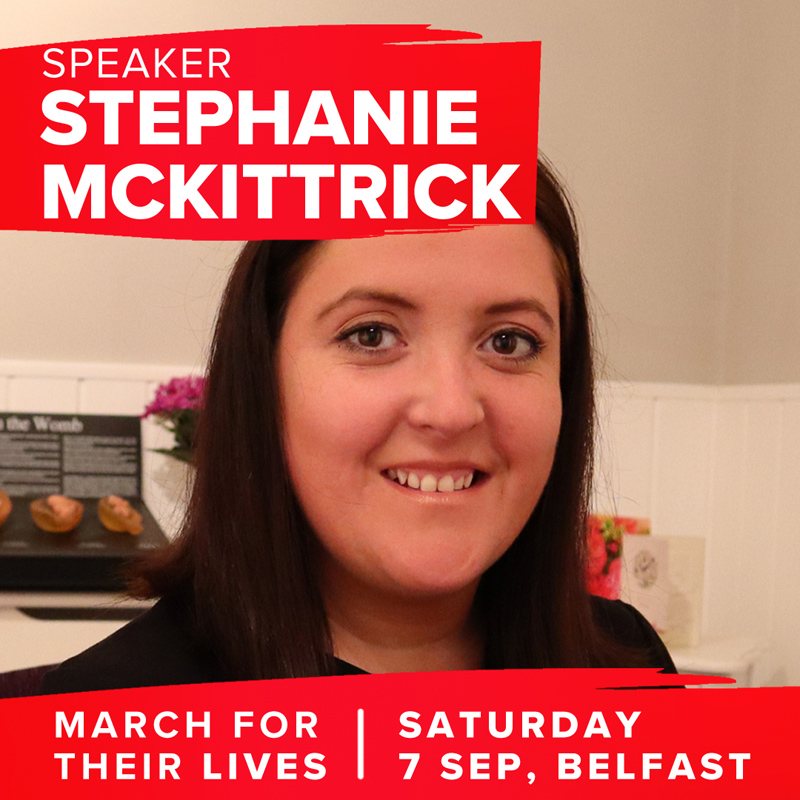 WHEN Stephanie McKittrick was told to terminate her baby to save her own life, she knew it wasn’t an option.

The recruitment consultant was just 20-weeks pregnant when she was diagnosed with hydrocephalus – a deadly build-up of fluid on the brain. 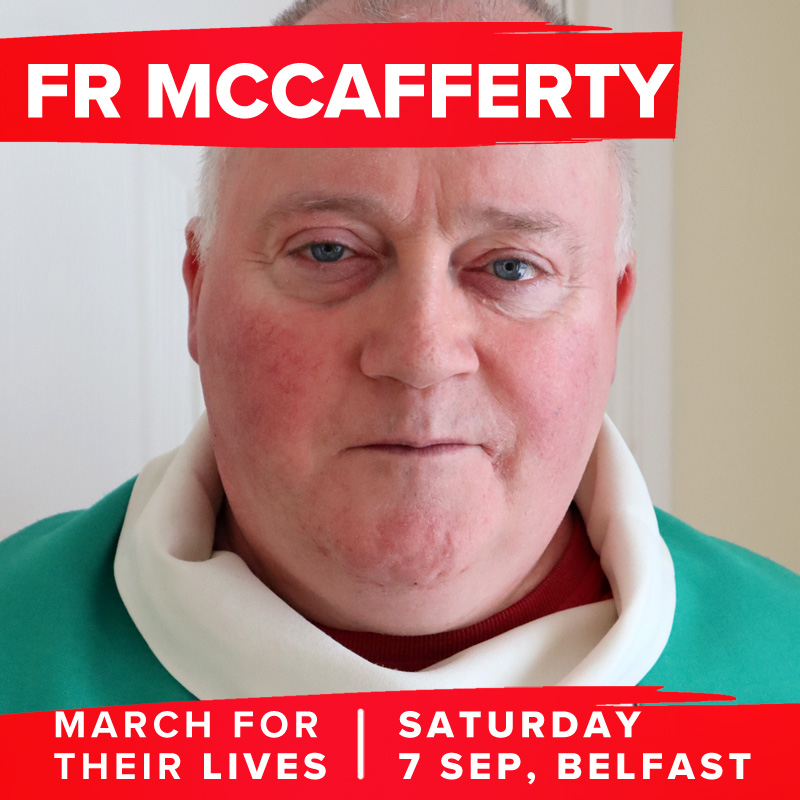 Fr Patrick McCafferty of Corpus Christi Parish in Ballymurphy, West Belfast, has been a outspoken defender of the right to life.